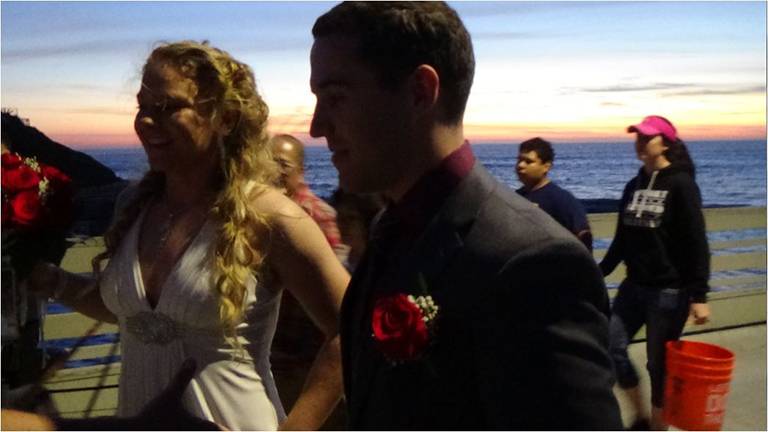 Joshua Adam Parsons and Corie Ann Parsons were married on the OB Pier in October 2015 following a dancing flash mob performed by local fun-loving folks. When asked why they selected the OB Pier as the spot for their nuptials, Corie shared the following story:

"I am from Ohio and he is from Washington state. We had never seen the pier until and wanted somewhere beautiful and romantic to have the wedding that would have a lot of people around. Since none of us had family in Cali, we wanted to make our special day fun for as many people as possible and bring some joy to the world. One of my friends suggested Ocean Beach Pier, and when we saw it online, we knew it would be perfect. We figured since we had no family in Cali, we would make strangers our family for the day. Josh and I met in Okinawa where we were both stationed. We were together for ten months before he proposed in Washington at the top of Mt Rainier while we were home on leave visiting his family for the first time. After he proposed and leave ended, he had to fly back and finish his tour in Japan, and I went to my new duty station in Cali. When I got to Cali I found out a month after being there that I would be deploying and so Josh and I were apart since Sept 2014 until I came home from deployment in August. We started dating Nov 16th 2013 and spent most of our two year relationship apart because of different exercises so we really got to know eachother because we talked all the time. Josh is my best friend and the best man I have ever known I could not imagine my life without him. I was very untrusting of men before I met him because I joined the Marine Corps after being left at the altar from a previous relationship after I graduated college. Josh healed my heart and helped me believe in love again. I knew when I met him God made him just for me."

Congratulations to Joshua and Corie!