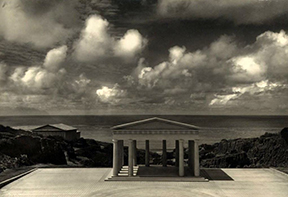 Ocean Beach Historical Society continues the yearlong celebration of its 25th Anniversary by presenting a Free Concert on Saturday August 17.  The concert will be held at the beautiful Greek Theatre on the campus of Point Loma Nazarene University, and will feature the very popular San Diego City Guard Band.  Concert goers are encouraged to arrive early to enjoy a picnic in this picturesque setting.  Bring your own picnic or enjoy popcorn, lemonade or something delicious from one of the food vendors who will be on hand.  OBHS has been working with the Heritage Band Society and its City Guard Band to present a concert of popular tunes and marches covering the last 100 years. The concert will begin promptly at 6 p.m. 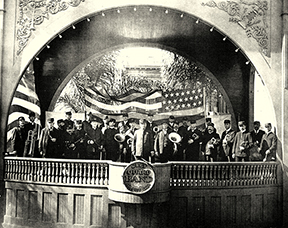 The relationship between Ocean Beach and The City Guard Band goes back to 1887.   When Carlson and Higgins first started selling lots in newly named and subdivided Ocean Beach, they realized that the best way to draw a crowd out to the remote stretch of sand dunes was to hire San Diego’s most popular Band.  The City Guard Band played at several of their weekend events.  In 1897, when Katherine Tingley laid the cornerstone for what became the Theosophical Estate, Lomaland, The City Guard Band played for the event.  Four years later Madame Tingley opened the first Greek Theatre in North America, San Diego’s oldest and most iconic venue.

The present day City Guard Band stands as a memorial to one of the first San Diego bands. In the 1800s, the City of San Diego supported a volunteer community militia as protection against the  risks associated with  life in the early days of the city. The group was referred to as the City Guard, later included in the California National Guard. The City Guard Band was an auxiliary unit of the militia, which eventually became part of the California National Guard. The Band served the needs of the city and as its emissary, around the state and across the nation. The Band gradually disintegrated in the wake of World War I, with many of the musicians moving to other local groups. In 1980, one hundred years after  the initial formation of the City Guard Band, a group of local musicians who were interested in preserving "turn-of-the-century" band music formed the Heritage Band Society, a California a 501(c)(3) Non-profit Corporation. The Society re-established the City Guard Band to keep alive the musical heritage by performing period music (1880 to 1950) in its library of nearly 3,000 compositions.

Ocean Beach Historical Society maintains an expanding archive of books, maps, oral histories, photographs, artifacts and publications which is open weekly for public research and investigation.  They are proud to continue their tradition of active involvement with other community, civic, business, municipal, educational, charitable, and faith based groups in Ocean Beach.  In 2019 OBHS enters the 25th year of offering their well-received series of monthly lectures and special community events, always well publicized and always free to the public.

Please join us August 17th for this old fashioned summertime concert.  Plenty of Free Parking will be available on the PLNU Campus.